This weeks Photo spot in the Alice in Wonderland Garden. 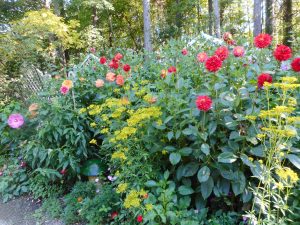 We have had some incredible luck with the Typhoons this year. They have all passed us by so far. The last one No. 15 was pushed out of the way by No. 13 as it passed over the Korean peninsula. You will notice that in Japan Typhoons aren’t named, they are numbered.

The weather here continues to be warm and mild. On some days even hot for the area and season: perfect weather for our resident reptiles to come out and bask, I’ve seen three different species of snake in and around the garden in the last few days. I even ‘rescued’ one, a non venomous grass snake, from entering the private house. It wrapped itself quite contentedly around my arm until I released it into the woodland bordering the garden a few minutes later.

In the garden the Phlox paniculata have almost finished their main flowering season, but if deadheaded as the flowers are dying back, will produce some smaller later blooms to continue the display into the autumn. These are being replaced and supplemented by the Actaea racemose, which are now coming into their best season, and also by the Asters in shades of blue, pink and white. The Dahlias have also been top-notch, flowering profusely throughout the garden and giving one of the best displays I have seen for some time.

This week we have had an amazing guy here from UK giving lectures to the Garden school on bulbs, new gardening trends of the west and other unique garden and plant based subjects. Michael Perry (Mr. Plant Geek) a regular favourite with our school students. Michael has been coming to Barakura for the past four or five years.

Autumn is now approaching, with the onset of coloured leaves and the cooling of the mornings, and plants are beginning to slow down their growth in preparation for the big winter sleep. In doing so their flowers are lasting longer and giving us more volume in the borders. It also looks like the autumn colour-up will be slightly earlier than usual this year.

Again this last Wednesday we had two volunteers helping dead-head the plants in the Border Garden and Flower Carpet.

Things don’t change too much in the garden from week to week, and the tasks we were performing last week will continue on through the next few days. However having spent time with the Garden School, some of those tasks will need a little extra effort. I also want to begin pruning some of the summer flowering shrubs which have now gone over. I will also be keeping a eye open from now, for the emergence of the Colchicums in the grass areas either side of the Round Pond, and for the blue flowers of the Aconitum carmichaelii beneath the Horse Chestnut by the Old Rose Garden.